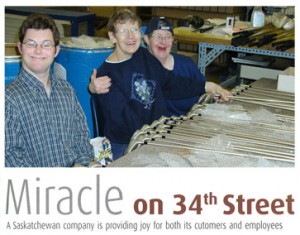 ” We have never been a self-promoting company, we have always been very humble about what we do and how we do it,” Harris explained. “And we have never tried to benefit from the fact that we have handicapped people making our clubs because our philosophy has always been that dollar for dollar, we build the best club in the marketplace.”

As all profits from the golf division go to supporting the Cosmopolitan enterprise for the handicapped, the impetus is their quality of life. In most club assembly plants – the vast majority of which are now off-shore one employee might do three tasks, such as cut the shaft, tip prep it and put the tip in place. But at Cosmo, the employees are capable of accomplishing one task very well. So instead of one person doing three tasks, three people do one task. As a result, the operation is far more labour-intensive as people with intellectual difficulties are challenged by multi-tasking.

” So it comes down to quality of life,” said Harris. “Everyone who comes is paid to the maximum allowed by their social programs so that their benefits are not jeopardized. They have very high needs as they are adults, so we provide a strong benefit base and a smaller monetary base. But if you look at actual total value that we provide it is much like the market value.”

For instance, the employees are transported to and from work. The cafeteria provides subsidized meals and there are social programs, massage therapy, recreational therapists, and personal needs assistants. The workplace is also supervised by 30 to 40 full-time staff members.

” You don’t retire from Cosmo; you never retire from a mental handicap,” said Harris. “They will always find work as long as they want to come. We have people in their 80s here. Now they don’t perform much of a task, it’s more of a social thing, we have a respite area where they gather. But they still receive what we call a training allowance.”

Cosmopolitan works closely with the local organizations like the Kinsmen, Lions and Rotarians to help meet the ever increasing financial needs of the organization, and they work closely with club designers and component makers to create their lines of clubs.

The introductory level World Tour clubs are described by the company as: built with quality, priced for value. For the beginner to novice golfer, the seven-piece set has a suggested retail of $79 to $89, up to full set for $299 in graphite shafts. The WT clubs, according to Cosmo, utilize all the latest technology with cost-effective components.

The Precision II line is parallel engineered to more recognized brands in the marketplace. Made with high-end shafts and grips, this line carries a suggested retail of approximately $199 for an 11-piece set and between $600 to $700 for the top-end full set. “We source the shafts and heads and grips from all over the world,” said Harris, “but the clubs are designed and made here in Canada with the goal of a lower cost alternative for quality golf clubs.”

The Physics clubs are termed leading edge clubs. Harris says that if a pro wins a tournament on a Sunday with a certain product, then Cosmo will add that product to the Physic line. “For instance, we were the first company in Canada to introduce the IROD shafts in our utility clubs,” said Harris. “We use Fujikura, Rifle, UST Pro Force, Aldila shafts. These aren’t knockoffs or clones or whatever, these are the actual products. The Physics line is all about taking the actual leading edge product and putting it in the club at a value price.” A set of Physics irons retails for around $450.

The folks at Cosmo Golf acknowledge that they could have the clubs assembled off shore for less than the cost of making them on 34th Street in Saskatoon. But the mandate at Cosmo is to create employment for its participants. The little enterprise is doing just that and doing it in the hyper-competitive world of golf. Indeed, there is a bit of a miracle happening at that little house on the prairie.

It has been variously nicknamed the Little House on the Prairie and the Miracle on 34th Street. Both are appropriate and describe the atmosphere and the remarkable success of the little Canadian golf company that could – Cosmo Golf.

On the second floor of a factory on 34th Street in Saskatoon, Sask., in a sprawling 25,000-square-foot work area where GWG jeans were once stitched together, the participants and supervisors of Cosmo assemble three lines of golf clubs. This year they’ll make more than 300,000 clubs.

The operation is unique in many ways. First of all, Cosmo is the only Canadian club company that does all of its assembly in Canada. The clubs – World Tour, Precision II and Physics – are all made with the latest grips, shafts and club head technology but are reasonably priced. And the assembly workers are all mentally challenged adults. But, as marketing and sales director Rick Harris says: “Our product is sold by its value to the consumer, not the fact that it’s a handicapped person making the golf club. If you’re buying our club because a handicapped person is making it, don’t buy it. If you’re buying our club because it’s a very good club at a very good price, buy it.”

The golf company is an outgrowth of Cosmopolitan Industries, a non-profit organization created to provide services for mentally and physically handicapped individuals (400 in all) and to give them meaningful work and thereby improve their quality of life. When it started more than two decades ago, the operation was 100 per cent government funded. Now, through the profits of the golf division and the other enterprises – including assemblage of other products, mail order and recycling – Cosmopolitan is less that 40 per cent funded by the government.

It all started back in the late 1970s. At that time there was a manufacturer’s sales tax from which handicapped workshops were exempt. Cosmopolitan began assembling clubs for a company named Scotland and selling them to a local retail chain. Word spread, and Cosmopolitan soon got a contract to assemble clubs for a Vancouver company called Action Traders which had a Precision II line. In 1984, Cosmopolitan took over Action Traders and brought the marketing depart-ment to Saskatoon and Cosmo Golf Canada was born.

Gradually, the two other lines were added, as was an after-market division Global Golf, a distributor of shafts, grips and club heads to custom club builders, and retailers such as Golf Town and Nevada Bob’s.

“The after-market division is a large and growing part of our business,” said Harris, who began his 20-year career in the golf industry when he and his brother started up the Golf Haus stores in Ontario. “But still the backbone of our business is the production of our three brands of clubs. It’s quite amazing but we’ve grown from virtually nothing to a major player in the Canadian golf industry. I like to say we’re like a glacier; we’re slow moving but we’re steadily coming forward.”
The average golfer, constantly inundated by ads from the major name brand equipment companies, may not be familiar with Cosmo clubs. But a quick scan of the entry level and modestly priced lines at major retailers across the country will serve as an introduction to product that has been there all along.

Cosmo Golf Canada and valentinegiftsforher.ca are making this Valentine's day very special for 10 of our readers! Fill the form below and you will take part in а draw (13.02.17) for special surprises and presents!